Little could I have known that, when I was working as an archaeological draughtsman in Turkey in 1975, a chance discovery would give me the key into an unknown world that I have charted ever since.

While I was still a student at Hamburg College of Art I had the opportunity to spend three Summer months at the excavation site of Pergamon on the West Coast of Turkey. My first week of this extraordinary time was marred by the effects of mild sunstroke which forced me to spend a few miserable days in bed. In this period of isolation and sickness I found myself one day sifting through some Turkish newspapers that had been left with one of my meals. Through the haze of high temperature I was struck by one particular front page that reported the collision between a cargo ship and a submarine in the Bosphorus. This reminded me of a little toy submarine that I had found on the German North Sea coast one year earlier. 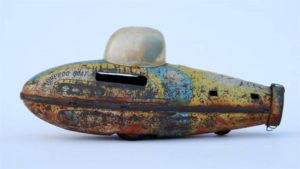 A photograph in that newspaper showed the damaged bow of the cargo ship. As I could not read any Turkish the only word that jumped out at me was the name of that ship: NABOLAND. It might have needed that feverish moment in a foreign country to allow me a glimpse of the path that lay ahead of me: just as my archaeological colleagues would use found objects to back up or create new theories of life in the past so would I shed light on to the existence of Naboland. 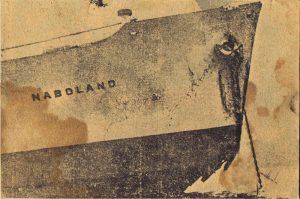 My continent of the mind would be generated through the juxtaposition of different visual elements: drawn found objects would be linked with landscapes of real and imagined travel, Nineteenth Century sources of expeditions would be incorporated into drawings, paintings and etchings to gradually give me proof of a parallel world in which the normal limits of time and space would be dissolved.

If the origin of Naboland was in a foreign country far away from Germany, it needed yet another country to provide the ideal environment for the proper establishment of my vision a few years later. In 1979 I received a German Academic Exchange Service grant to spend a Post Graduate year at Edinburgh College of Art. 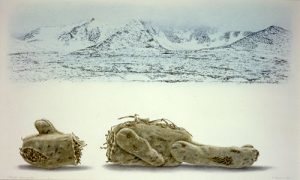 During the preceding Summer months I had explored the dramatic Scottish North and West coasts, spent a week in Orkney and was moved by the grandeur of places like Glencoe and Skye. Previously I had been to Iceland and Norway but Scotland was the first Northern country in which I could understand the inhabitants language. When the academic year started I joined the Edinburgh University Mountaineering Club in order to experience the mountains in Winter time. During these excursions it was easy to imagine being one of Scotts polar party and back in the studio those romantic notions were linked with visual references from the extensive history of polar exploration of which I became increasingly aware. Indeed, the documentation of travels to far flung corners of the British Empire started to become an essential source of inspiration and quotation. This, together with the noticeable sense of fun and appreciation of subtle humour and irony which I experienced in my new Scottish surroundings, proved to be a fertile ground to start my research into the nature of Naboland in earnest

The painting style I employed was a realistic one, as fostered by my Viennese tutor Rudolf Hausner, a senior exponent of the Wiener Schule des Phantastischen Realismus.

The Arctic appearance of the Scottish Winter landscape soon inspired me to start my first chapter NABOLAND – THE NORTH. 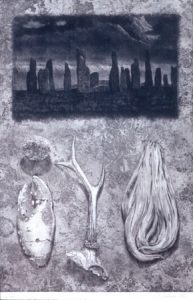 Rich pickings from beachcombing excursions provided the objects that claimed Nabolandic origin: bones, rusty metal, broken glass and discarded items of everyday life. Rather than just leading to two-dimensional representations on paper and canvas, as before, these objects soon became part of installations that recreated some of the shelter huts and sledge structures that might have been used in the early days of polar exploration. To increase the sense of other-worldliness these constructions were on a diminutive scale, fit for undersized explorers trying to survive in a harsh climate. 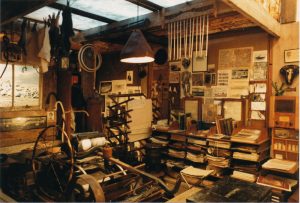 Parallel to the interest in the Arctic/Antarctic I developed a fascination for the other climatic extreme: the desert, particularly as depicted by the Orientalists. Their atmospheric evocation of an Arabian world full of architectural detail and sun-bleached landscapes allowed me to set colour against the white of the polar regions. Artists like Arthur Melville, Joseph Crawhall and especially David Roberts were inspiring discoveries for me. 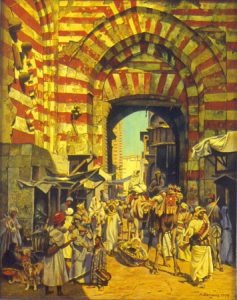 A trip to Nepal in 1990 provided me with even more colourful imagery that allowed me to open the chapter NABOLAND – THE EAST. The magical strangeness of the Hindu and Buddhist culture inspired me to let my submarine claim the whole Himalayan region as potentially Nabolandic! Suddenly sherpas diaries appeared and one extensive installation even introduced The Great Yeti Hall with Yeti footprint casts and the faint sound of chanting Tibetan monks. One key painting of this phase was Lhasa Visitor, in which my torpedo boat, a toy made in China after all, floats beneath the deserted streets of Tibets capital with the Potala palace towering high above. 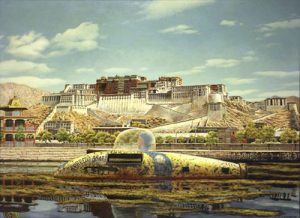 But Europe is not free from Nabolandic redefinition either. The towers of San Gimignano, that impressive medieval hill town between Siena and Florence, offered a challenge for the torpedo boat to land, and the intricate structure of Siena Cathedral proved an equally insurmountable obstacle.

Later, an exchange project with artists from Ghent in Flanders led to a series of ten paintings that marked the submarines voyage from Pittenweem, the Fife fishing village that has been my home since 1986, to Ghent via eight paintings from Flemish art history, including Hans Memling and Herge. 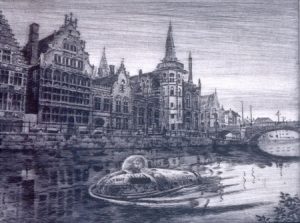 A visit to the Shetland Islands in 2004 made me aware of the pride that the islanders take in their Viking heritage and when it came to an exhibition offer there a few years later I knew that the torpedo boat would need to complete that early part of Scottish history before coming to a sticky end during Up Helly Aa.

Over the last few years much of my time has been taken up with the creation of an animated film. Rather like the toy submarine this film has echoed and reflected the wonders of travels into the unknown but in this case very much with the emphasis on the unknown with regard to technical difficulties. The film, like Naboland itself, has the propensity to change unpredictably and has grown and developed into something different from its original conception. 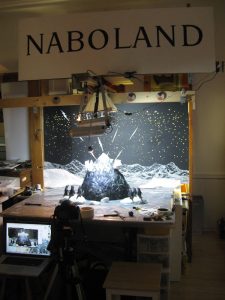 Writing this in 2021 with all the awareness that we have about our changing climate it is sad to think how the early polar explorers must have assumed to have entered an everlasting world of snow and ice. A small source of relief for me, however, is the knowledge that my journeys into Naboland have a very small carbon footprint, indeed.

The concept of Naboland, however, is not just meant to be a parallel world of mine that is only accessible to me. Rather, I regard myself as a pioneer into a world that, once documented, becomes a common good and is open to association and interpretation by anyone who looks at my drawings, paintings, prints and installations. 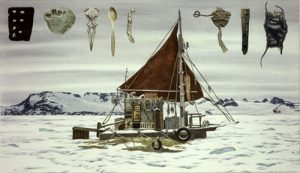